Generally, all shower drains have a U-trap in the drain pipe. This is because a  shower drain trap keeps the bathroom safe and fresh by stopping the toxic gases from going up to the bathroom. The gas not only makes the bathroom stinky but is unhealthy and risky as well.

In most buildings, it is mandatory for a shower drain to have a trap. Not only is it mentioned by the building code but it also keeps toxic gases and organisms away preventing them to rise up to the house. This is why a shower drain needs a trap.

To discuss whether a shower drain needs a trap or not, we are here with the article. We will elaborate on the necessity of a shower drain trap, and discuss other factors related to it. Thus to make concepts clear, stay with us and read the article.

How Does a Shower Drain Trap Work?

A shower drain trap has different parts that make the entire mechanism efficient. So let’s start with the parts, and talk about the function of each part. All these shower drain traps work together to stop gases, animals, or substances from traveling up to the pipe.

Let’s learn which part of the part does what job:

The Inlet of Pipe:

The downward bent is the main part of the trap. It has either a U-bent or a P-shape. This is what accommodates enough water to give an airtight trap between the inlet and sewer portion of the trap. Now when the water travels down the inlet, it eventually replaces the water that the trap was holding. This, the water goes down the pipe.

So the trap is always holding some water and this is what creates the ‘trap’. If the sewer gas, substances, or any animals try to go up to the pipe, the bent U or P-shape and the water restrict the movement. Thus no gas or animals can travel up through the pipe to your residence.

For cleaning and repairing, the trap features a cleanout just in the middle of the P-trap to drain out the water.

Does Every Drain Need A Trap? (2 Main Benefits Of Shower Drain Traps)

The two main benefits of using a shower drain trap are given below:

When wastewater travels down a pipe, it releases toxic gases on its way to the sewer. Even after reaching the sewer line, toxic gases are released. These toxic gases not only make the house stinky but are unhealthy as well. Some gases like methane and hydrogen sulfide are flammable. A few gases also decrease the level of oxygen in the air. These gases are dangerous and can cause accidents.

If the bent shape was missing, small animals like rats, mice, even snakes can ride up to the house through the pipe. It is easy for them to ride up if the pipe is straight and there is no water trap.

But drain pipe traps and the water stops the animals from riding up. It restricts the movement of animals upwards.

These are the main two reasons why using a shower drain trap is necessary. The reasons may seem minor but are crucial if these things actually occur in your residence. Therefore to stay safe and protected, you must install a shower drain trap.

4 Easy Steps To Install Shower Drain Trap: Do It Yourself

To use the trap effectively, you have to install it correctly. If you know how to install it properly, you will get the best results. And if you think it is complicated to install shower drain traps, you are wrong. If you know the process, you can do it easily and enjoy the benefits.

To make the process simple for you, we are here with the installation process of a shower drain trap:

Step 1: Make The Subfloor Around The Drain Ready

Before you install a drain pipe trap, you have to shape and trim the subfloor around the drain using an electric saw. Cut it in 12 by 12 inches dimensions. Do the cut above the floor plates so that you can easily nail down the subfloor again once you do the cut.

The cut should not be deep as it may damage the pipe and floor.

You have to open and make some space under the area where you made the cut using a pry bar. For installation, you have to cut the drainpipe. To do so, first, measure the P-trap. This measurement would be the distance from the drain base to the drainpipe where you have to make the cut.

Step 3: Fix The Trap To The Drainpipe

You need a connector and glue to attach the trap to the drainpipe. Now, across the horizontal part of the drainpipe, fix the P-trap using the glue and connector. In this way, the opposite end of the P-trap would face upwards directing beneath the drain of the shower.

The initial stage of installation is done. Now you have to reinstall the floor. Simply place the square part (that you have cut) into the floor. Now measure and note the distance between the drainpipe base (or subfloor) to the P-trap.

Now take a pipe of the same sphere area as the P-trap and cut the length that you have measured. Then connect the pipe to the P-trap to reconnect the shower drain with the pipe. Leave it for an hour to let the glue dry out. And the bathroom is ready to use.

The process was simple, wasn’t it?

Should You Put Trap On A Shower Drain?

Yes, you must put a trap on a shower drain. The soap scum and chemicals with water release toxic gases as they reach the sewer line. These toxic gases can move up if the drainpipe has no trap. Similarly, animals can travel up if there is no trap.

How Far Can Trap Be From Shower Drain?

Ideally, the trap should not be farther than 15 inches from the shower drain. If the trap is lower than 15 inches, the force of water can make it go out of the trap. Using a deeper trap can also clog it up making it difficult for the trap to function efficiently.

Where Is P-trap In The Shower Drain?

The P-trap is placed down the drain-pipe hole. The pipe can be a single pipe having a P-bend. Otherwise, you can fix an extra P-trap to the main drainpipe. Just after the inlet, you have to fix the P-trap that is the main downward bent which goes to the outlet and finally to the sewer line.

Therefore, the P-trap is placed just beneath the drain-pipe hole after it enters the inlet.

Why Is S-trap For Shower Drain Is Illegal?

Not everywhere you can use an S-trap. Most people use a U-trap or a P-trap in the shower drain. There is a reason why S-trap is not suitable for this purpose.

The S shape is not suitable for working as a trap. The trap may make the water leak out from the trap. As the layer of water is removed, the trap doesn’t work efficiently. Thus the toxic gases can easily rise up and get released to the house causing difficulties and risks.

This is the reason why using an S-trap is illegal in shower drains.

What Happens If You Don’t Vent A Shower?

Without a vent, a shower won’t function properly and fail to drain the water. Poor ventilation also causes blocks and clogs in the drain releasing toxic gases and odor. These odors and gases can rise up to the house if the shower is not vented.

When properly vented, the gases leave the system easily keeping the shower in a good condition.

It is clear that a shower drain needs a trap. The trap is what keeps your bathroom and house healthy and safe. Without it, not only the bathroom becomes stinky but can cause several accidents. Therefore, you must install a trap in the shower drain. 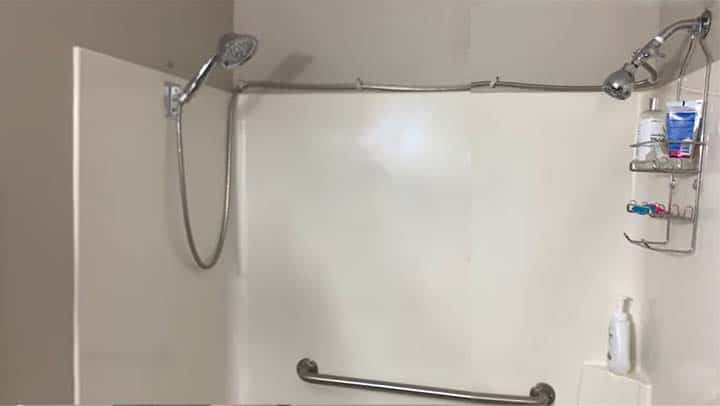 Have you heard the term – “His and Hers Shower Heads”? The term is used when two shower heads are working simultaneously and side-by-side. You…