Polybutylene pipe and PEX are two of the most commonly used plumbing setups in homes. These pipes have been heavily in use since 1980. Polybutylene pipes were introduced earlier and prevailed the homes till the mid-1990s. After that, PEXs took over the polybutylene pipes and are still seen in many areas.

That’s why many old homes may need the replacement of polybutylene pipes due to their damage. So, the real question is, “Can I use PEX fittings on polybutylene pipe?” This is a tricky question with an even trickier question.

The inner diameter of the polybutylene and PEX are similar. However, PEX fittings have a bigger outside diameter. So, you must consider whether or not it would fix the existing plumbing setup. Also, you need to look at the building codes in your regions to see if they allow using PEX instead of polybutylene.

Polybutylene, aka PB, refers to plastic resin. It came into the market in the late 1970s. The plastic resin was hugely popular for plumbing and piping setups for almost 20 years. Almost every apartment and home built between 1978 to 1995 had polybutylene piping.

These pipes were more flexible and affordable than copper fittings. So, it almost replaced the copper piping entirely. At that time, experts considered it as the plumbing solution for the future. The low construction cost of the pipes made them instantly popular among manufacturers and homeowners. So, during this period, America saw an influx in polybutylene pipe installation.

The top three regions to welcome the piping mostly were:

Thus, almost the entire North and West America have installed these pipes. And it was understandable because homeowners got the PB pipes cheaply. The high-quality construction and flexibility of the pipes made them versatile too. In fact, industry experts projected that almost 6 million to 10 million homes installed these pipes during 1978-1995.

The PB pipes mostly come in grey and white colors. The diameter of the pipes varied depending on their purpose of use. Usually, you will find them in 1-inch and ½-inch diameters. The two main applications of these PB pipes were:

These pipes were used widely as underground water mains. Its improved flexibility and durability made them a popular choice for underground installation. So it could accommodate the high pressure of water and soil underground.

Also, the flexibility allowed to bend the pipes as required. So, installing it in cornered spaces became easy. Plumbers and homeowners didn’t need to worry about breaking the pipes while bending. Also, their plastic resin helped them to provide an extended lifespan without rust. Previously, copper fittings were easily corroded under the soil. But, this plastic resin construction for polybutylene pipes negated the quick corrosion.

Inside a home for plumbing applications:

Another common usage of polybutylene pipes is in interior plumbing setups. You will see them in regular water supply lines in older homes. They might run through the walls. Then, these pipes will feed the kitchen sink and bathroom faucets.

You will also see them in the supply lines for the water heater. Finally, homes during the 1980s used PB pipes in the unfinished undergrounds and ceilings. As it shows, polybutylene pipes were the common household name in almost every North American building.

The Problem with Polybutylene and It’s Using Restriction:

Polybutylene pipes were invented in the mid-1970s and used only in house plumbing systems. As their applications became prevalent, they started to show a few dangerous problems. Scientific research found that the plastic material used in it is highly reactive. It reacts with the oxidants present in the air. Slowly, it releases the oxidant disinfectants in the water.

As a result, the water becomes polluted. Researchers have found that these disinfectants are harmful to human skin and health. Also, the pipes release chlorine due to the oxidant reaction. Gradually, it starts corroding the pipes.

The chlorine corrosion will result in flaking and scales. So it corrodes the pipe from the inside. Eventually, the pipe will burst and get damaged. So it will start leaking. It reduces the lifespan of the pipes. Also, it runs the risk of damaging the entire building.

Following all these problems, two major lawsuits were filed against using PB pipes in homes in 1995. Also, damaged homes and buildings got a $750 million refund for leaks and bursts of the polybutylene pipes.

Can I Use PEX Fittings on Polybutylene Pipe?

From the previous discussion, you have seen that polybutylene pipes burst too quickly. Also, these pipes have been out of use now. So, older homes will now require replacing polybutylene pipes. But can you do it with the PEX pipes?

Of course, PEX pipes are excellent. These are durable and easy to install. So, you can use PEX piping in residential plumbing applications. But are they suitable for use instead of the PB pipes?

For this, we need to look at both the interior and exterior diameters of the PEX and PB pipes. So, here’s the diameter measurement of both pipes:

As the discussion shows, you may use the ½ inches and 1-inch PEX pipes to replace the similarly sized PB pipes. Nonetheless, there’s a catch to it. Although the inner diameter of the PB and PEX pipes appear identical, they have different outer diameters.

It happened because PEX pipes have thicker exterior covering. So, it is thicker than polybutylene pipes in residential uses. Hence, you need to measure the diameter of the installed place where you wish to replace the PB pipes with the PEX pipes. If the installation places have suitable space to fit the PEX pipes, you may use them. For this, use a professional diameter measuring tool.

It is a crucial measurement because a slight mistake will ruin the walls and ceilings. If the space is too tight to fit in the PEX pipes, you can cut the concrete using a concrete cutter or saw. It will allow you enough space to fit the large diameter of the PEX pipes.

PEX, aka, Cross-linked polyethylene pipes, have been used since the 1970s. They became popular in the early 200s after the ban on polybutylene (PB) pipes. Also, plumbing experts suggest using PEX pipes because of their high-end benefits. It includes:

Nonetheless, you need to be aware of a drawback of PEX pipes. If your locality has a high rodent attack and infestation possibility, local building codes might limit PEX fittings. So, you must consult with the local building authority to ensure permission for PEX fittings instead of PB fittings.

When you use PEX pipes, it requires careful preparation and installation. You can’t just remove the PB fittings and start using the PEX pipes in their place. You must follow our suggestions to install the PEX pipes safely.

A blocked shower drain or slow flow of wastewater through the drain is not what we expect. To let the shower drain work effectively, the… 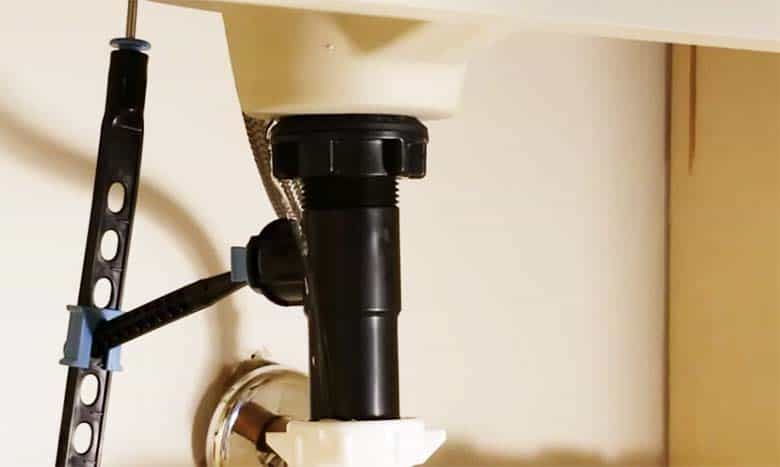 Bathroom sink drain leaking around threads is caused by different reasons, including loose sealing between thread and pipe, open drain, or drain damage. Leaks in…